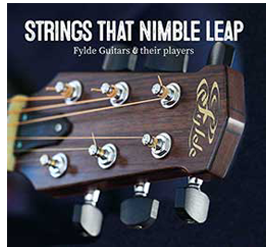 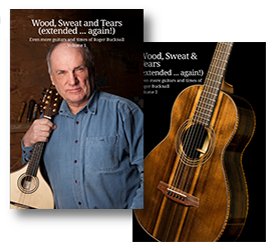 It's the usual story, this guitar has been trying to build itself for quite a long while, just sitting there waiting for me to have space in my head and on my bench. I've made one or two of a similar nature before, using the same wood from the famous Walnut tree that Queen Victoria planted at Kew Gardens. I wanted to keep this one simple, and couldn't decide on the neck. By lowering the angle of the headstock slightly, I was able to cut the neck from a spare piece of the same tree so that everything matches in a rather dark bewitching fashion. I think the lower angle will help with tuning a little, and I might use the idea more often. And doesn't it look nice? I thought it appropriate to add just a little decoration on the fingerboard.

The soundboard is a rather pleasant piece of chocolate cedar, and I’m going through a dark period, so I added a bit of extra black round the soundhole. The bindings and headstock veneer are Rosewood.

I've been looking for a suitable quote from Shakespeare for this little sonnet of a guitar, but Walnuts are a bit thin on the ground with the Bard. The only one I found was "As jealous as Ford, Chat searched a hollow walnut for his wife's leman."   If I widen the search to include "walnut shell" - I get this

Why, this was moulded on a porringer;
A velvet dish. Fie, fie! 'tis lewd and filthy;
Why, 'tis a cockle or a walnut-shell,
A knack, a toy, a trick, a baby's cap.
Away with it. Come, let me have a bigger.

Hmmm. Maybe William didn't know what a walnut was.

It has the typical Ariel sound - "Light and Airy Spirit". Maybe a little warmer and stronger than the standard model.